What is a natural ore?

A natural ore is a pack of minerals from volcanic stones in Japan. These stones are full of various minerals and they are processed under a special manufacturing technique until they become of hexagonal shape. Below are the properties of natural ores.

The two characters enable the natural ores to emit both positive and negative charges. Whether they are heated, blown or vibrated, the ores will gradually emit the far-infrared ray and negative ions to the environment.

The far-infrared ray is a ray that emits heat. We normally receive the FIR from the sun but we cannot see it as the ray is invisible to human eyes. The FIR is in the red light range on the electromagnetic spectrum. The wavelength of FIR is from 4-1000 microns (1 micron = 1/1000 millimeters). Human cells can absorb the FIR at only 6-14 microns which are within the rage of 2-25 microns emitted by our natural ores. You can be sure of the benefits from this treatment. The shorter wavelengths are safer than the rays from the sun.

The FIR aids all living creatures to grow. For humans, the FIR affects water molecules inside the body. When we receive this ray, the water molecules will be vibrated and separated into small pockets which can move more easily. Water is really important to our body as it is a solvent of every matter such as hormones, gas, diets and wastes. As a result, water can move effectively, it can bring nutrients and oxygen to the cells faster and maximize the food exchange process. Old cells become stronger and energized. New cells are formed. Both can get rid of wastes more efficiently and build their own immunity.

Also, we get benefits from deep heating. Our blood vessels will be expanded. Blood and lymph circulation is increased. The sweat glands are stimulated to drive away wastes from the body. The deep tissue heating also can relieve muscles, alleviate inflammation, reduce pains and induce tissue flexibility.

Add us as friend on LINE: @osslounge 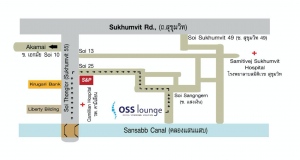